Crypto Protection 101: A Guide to Keeping your Digital Assets Safe and Secure

Future of Crypto: Predictions from Experts

After experiencing a significant price increase over the past week, Binance Coin (BNB) has broken beyond the $300 threshold. On Thursday of last week, the token was trading at a price of approximately $274 per coin and even threatened to drop lower as the week progressed. Despite this, the currency bounced back on Tuesday, increasing its value by almost 5% to reach $289 in trading.

Since that point forward, everything has gone swimmingly for BNB, as evidenced by the fact that its value has continued to rise. As of writing this article, BNB is currently trading at $313. The breakthrough of the $300 threshold for BNB occurred at the same time that the value of the popular meme coin Dogecoin increased by more than 90% in a week. BNB holds the position of being the fourth largest cryptocurrency by market cap at the moment.

BNB increased over 19% in value As the Overall Crypto Market Recovers. 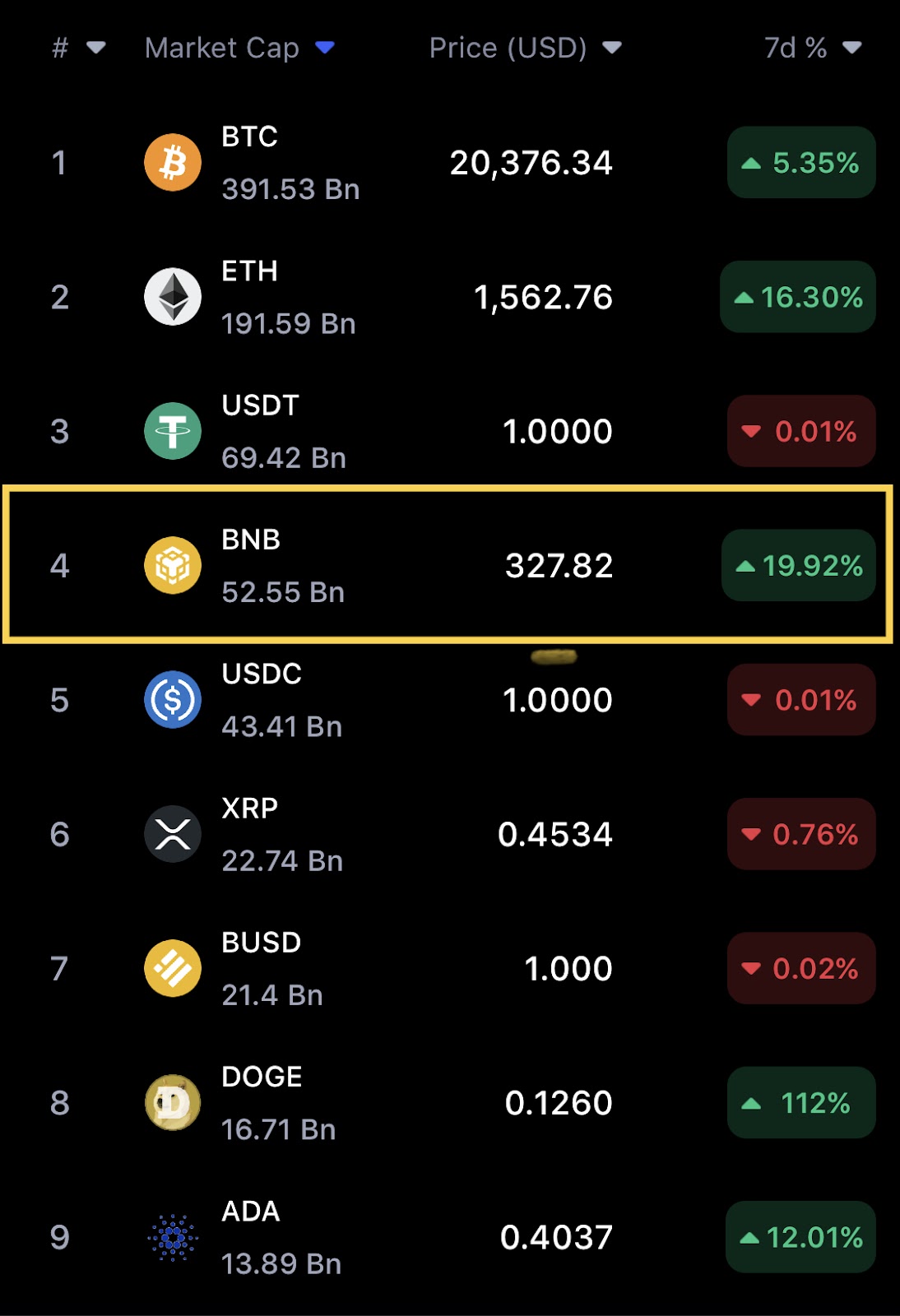 The cryptocurrency market has seen a significant recovery this October. The whole cryptocurrency market experienced several weeks of losses before this week when it finally went through the $1 trillion market cap barrier. This action served as a driving force behind the enormous price increases seen in a variety of cryptocurrencies. One such example is Binance Coin, which saw its value increase by more than 5 percent just on Tuesday. It kept going up during the week, ultimately increasing its value by a total of 15%.

When a correction phase began across the whole cryptocurrency market on October 6th, Binance coin was hit particularly hard. Before the correction began, BNB had reached a price of $296 and was on the verge of trying to break the $300 barrier. Despite this, it was never able to reach that milestone since the bears gained control of the market and drove the currency to a one-month low of $257. The road to BNB’s recovery was sluggish, marked by value swings ranging from $266 to $276.

BNB successfully escaped the confines of its consolidation range on Tuesday. Yesterday marked the day that it finally surpassed the $300 threshold, and today it reached a new monthly high of $318. As of right now, BNB is up around 5% in comparison to Bitcoin, and it seems as though it will continue to increase so long as the broader market recovers.

As seen on the daily chart, BNB started recovering from the crypto market Dip in June by creating a series of HH and HL in mid-July.

Then it showed bearish signs by creating a head and shoulder chart pattern. However, after the sudden pump in the crypto market on Tuesday,  BNB  had just broken out of a Trend channel, heading straight to its next resistance zone at $406.

The breakout caused the Moving Average Convergence(Mac d) to indicate a buy signal which gave crypto futures traders the opportunity to long BNB from the breakout a perfect entry.

The positive performance of the token came after it was reported that it will assist Twitter in removing bots under Elon Musk’s new leadership.

The cryptocurrency exchange Binance contributed $500 million toward Elon Musk’s acquisition of the social networking website. Binance’s Chief Executive Officer, Changpeng “CZ” Zhao, made a cryptic reference to an interview he did with the cryptocurrency media business Decrypt in a tweet. He stated, “Our intern claims that we wired the $500 million two days ago, which is presumably just as I was being asked about Elon and Twitter.”

After that, CZ tweeted “Let’s unleash the bird” and “Crypto Twitter,” with the former appearing to be a response to Musk’s earlier tweet that stated, “the bird is freed.” Today, BNB hit a new monthly high of $318.80, marking the first time since the middle of August that the stock has been at this level. There is a possibility that Musk is also responsible for the recent outperformance of another famous cryptocurrency. Following a price pattern that began with Musk’s participation on Twitter, the DOGE/USD pair reached its best levels since April and has been climbing steadily since then. DOGE, one of Musk’s favorite cryptocurrencies, is still waiting for a larger usage application, which may be developed with his assistance.

Considering the good news of BNB being used to remove crypto bots from Twitter just gave it a new utility. This means a sudden increase in demand for BNB could result in surpassing the $400 resistance zone.

As of the time of this article, BNB is priced at $325 per BNB, which is a very good time for smart investors to buy BNB knowing they would make over 60% profit once it gets to $400.

Crypto Protection 101: A Guide to Keeping your Digital Assets Safe and Secure

Future of Crypto: Predictions from Experts

Top Cryptocurrencies to Watch in 2023

We love to keep you ahead!